Posted at 12:14h in by LogiSYM Editor 0 Comments 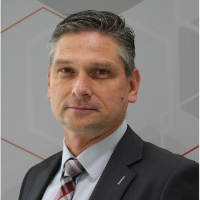 Peter Koltai was born in Hungary and studied nautical science in Odessa (former UdSSR) and Györ (Hungary), before gaining experience in the merchant marine. He completed an MBA in Schweinfurt (Germany) and joined Audi Ingolstadt in 1996 as an engineer in the International Logistics Planning. Since 2001 he has held various management positions. After 3 years in the UK he led Audi’s Inbound Logistics Control, becoming, in 2017, Director of Inhouse Logistics for the same car plant in Ingolstadt (approx 2.600 premium cars per day). Between 2012 and 2018 he was responsible Senior Director for Production Control and Logistics of Audi Mexico’s new factory in San Jose Chiapa, seeing this through from start of project to becoming stable running factory. Since 2019 he has been responsible for Supply Chain International of Audi, located in Ingolstadt, Germany.

Peter Koltai will be appearing in the following sessions:

Consumers, governments, shortages – will logistics assets remain in the wrong place and are unbalanced supply chains here to stay? How are shippers de…